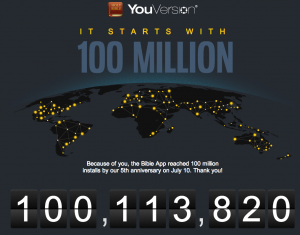 On July 10th, YouVersion celebrates its fifth birthday. And one with an extra reason for celebration. Just a little while ago, the YouVersion bible app has been installed on the 100 millionth device and the counter is still going.

I have been using the YouVersion bible app ever since I got my first iPhone and as the first iPad landed on my desk, it was one of my first apps. And it has come a long way since. Personally, I find it inspiring to know that the whole idea behind YouVersion was conceived by Bobby Gruenewald in 2006 in a security line at O’Hare airport in Chicago. And he wondered whether we were at a point in time where technology could transform the way in which we engage with the bible. And that started YouVersion, which now reaches millions of people with scripture on 100 million devices.

Again, congratulations to the YouVersion team. For having the vision, for building the app, but also for engaging people with the scriptures through initiatives like reading the entire bible across the world in 400 seconds. Those are fun ways to be brought back into the bible again and I am sure they are many more that have inspired people to pick up their bible again and got them to stick with it.

If you want some statistics, this infogram was published by YouVersion on the 26th of June. It gives you a great overview of what is happening in YouVersion every second.