56% of social media users are afraid to miss something 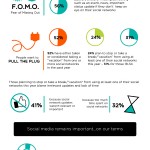 MyLife.com did a survey in America on social media behavior. And it reveals that many social networkers are becoming overwhelmed by all the balls they are trying to keep in the air. As the number of networks is growing, so does the pressure to keep up with everything and everyone. This is called the Fear Of Missing Out and it has already become an official abbreviation (FOMO). The stunning thing is that over half the people using social networks are suffering from FOMO.

An interesting counter movement is the trend to take a “vacation” from online media. About 52% of social network users have either planned or taken a time-out from their social networks in the past year.

So, what about these statistics? Are they showing us that social networks are unhealthy? That social networks bring us more stress? Well, they might. The trouble that we see in many that start using social networks, is that they feel they need to read everything from everybody. It honestly is time to let that go. The truth of the matter is that you are always going to miss out on something. But that has always been the intention. Ever since Babel happened, we have been missing out. Either by physical distance, language barriers, cultural differences, but we have been missing out. You might feel that I have just enlarged the scale a bit. So, lets bring it back to local proportions. I am sure you have had it happen where friends had gone to a movie that you had not seen. On a night when you might have been available. But because they set the appointment on the sidelines of the football pitch, you did not know about it. That is what social media is like as well. You can not follow every conversation, respond to every message or event or even attempt to.

That is why good social media use comes with an attitude that allows you to “let go”. To realize that as you are following 300 people on Twitter, you will not see everything they post. And the same goes for your 800 Facebook friends. But you can still be friends and keep up with what is happening. You just will not see all of it. As it is unnecessary to see everything anyway. It is not that before social media you spent the first half hour after meeting a good friend catching up chronologically on everything they had done in the past two weeks. And your relationship never collapsed then either. Did it?

So, do you let go? Or do you think it is vital to see everything that is happening in your timeline? Let us know in the comments below.

« Google updates Maps to 7.0 includes new Explore option » Twitter starts new media blog to show what and how to share